Get involved with Fareshare in Brisbane

Our new Brisbane kitchen is ready to register regular and corporate volunteers. Help power the biggest charity kitchen in the Southern Hemisphere. Whether you are an individual or part of workplace team, we need your support.

Every meal makes a difference and every donation means more meals.

Powered by volunteers and supplied with surplus food by Foodbank Queensland, we aim to cook one million meals in the first 12 months. Sign up now and help us feed people in need with nutritious meals.

Step inside the Brisbane kitchen

FareShare’s Brisbane kitchen has been designed to cook meals at scale with quality ingredients supplied by Foodbank Queensland.

The huge kitchen – approximately the size of a basketball court – is equipped with industrial scale food processing tools including 300 litre electric saucepans which cook 750 meals at a time.

The multi-million dollar facility powered by volunteers aims to cook 1.25 million meals for vulnerable Queenslanders in its first year of operation and scale up to five million meals a year.

BrisbanLaunch1minWide from Lucy Farmer on Vimeo.

Latest news from FareShare in Brisbane 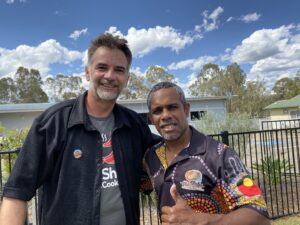 Reflections on a massive year for FareShare’s First Nations programs Distance no barrier to urgent meal relief Six thousand FareShare meals are now being enjoyed by the First Nations community of Mornington Island in response to a request for urgent assistance. In a logistical feat supported by Woolworths and supply chain Primary Connect, FareShare was able to reach the remote 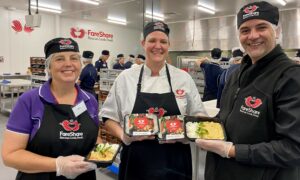 Adding science to FareShare’s recipe for nutrition FareShare always strives to make every meal count nutritionally and is now applying science in collaboration with the University of Queensland to maximise the health benefits. Helen Truby, Professor of Nutrition and Dietetics at UQ, says FareShare has an important niche in food 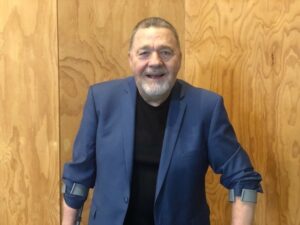 From despair to hope, Rob’s journey nourished by FareShare meals Every day, thousands of people enjoy a FareShare meal. Each of them has a unique story and reason for asking for help. Rob is just one of them and he’s been generous enough to share his life journey with us…

Fareshare Brisbane in the media

Inside Brisbane's FareShare kitchen, which aims to cook 5 million meals a year for those in need

Wiping tears from their eyes, volunteers surround a bench furiously peeling and chopping onions as they come in by the bagful.

It isn’t easy work but there are no complaints in this basketball court-sized kitchen, which turns surplus food into free healthy meals for people in need around Queensland. Inside a commercial kitchen the size of a basketball court in Morningside, a team of volunteers is scurrying to chop, peel and cook 5000 meals each day for people in need.

A former serum laboratory was transformed into the southern hemisphere’s largest charity kitchen, which officially opened on Tuesday. 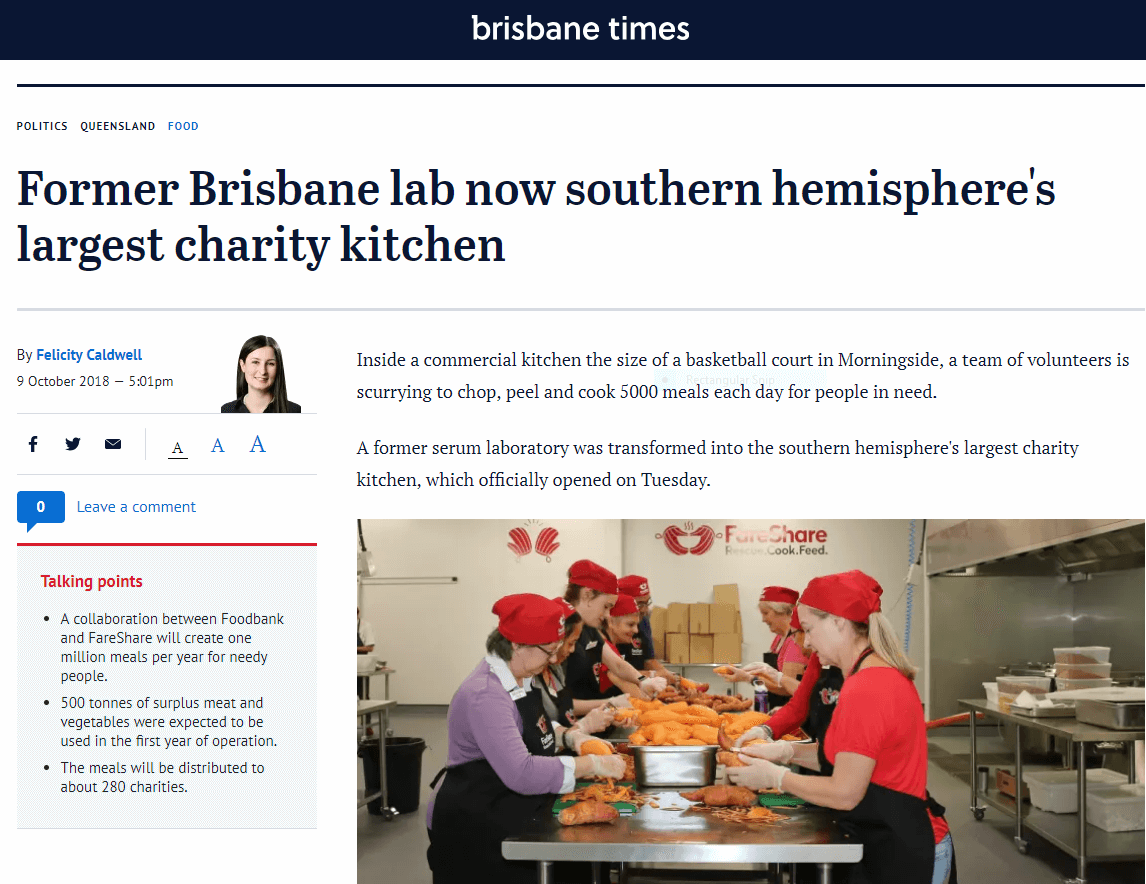 THE country’s largest charity kitchen has opened in Morningside with a grand plan to cook more than one million meals in its first year of operation and to scale up to five million meals a year.

After 17 years in Melbourne, where close to 1000 volunteers help cook 1.2 million free meals a year, Fareshare is now opening its second kitchen in Brisbane. Get in touch with Fareshare Brisbane