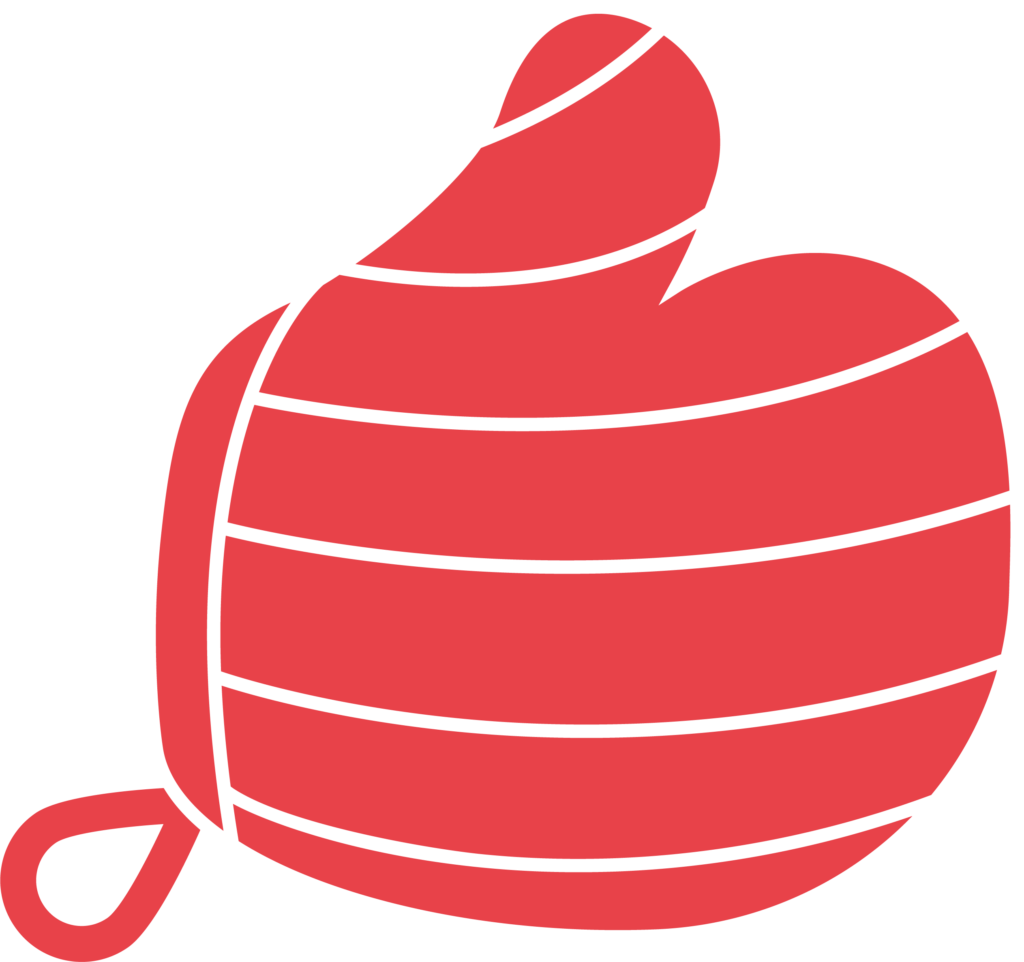 A society where food is not wasted and no one goes hungry.

Rescue food that would otherwise be wasted.

Cook and distribute nutritious meals to people in need.

Inspire and empower action on food rescue and hunger.

For 20 years FareShare has been rescuing quality food and cooking it into nutritious meals for people doing it tough.

From our humble origins baking a few hundred pies each week, FareShare now operates Australia’s largest charity kitchens in Melbourne and Brisbane where our chefs and volunteers work hand in hand to cook the best possible meal for every person.

Our healthy, delicious meals are given away free to front line charities such as soup vans, homeless shelters, women’s refuges and community food banks.

FareShare’s cooked meals do more than fill empty bellies. They feed the soul as well as the body by showing that somebody cares.

It is a tragedy that while millions in our community experience food insecurity, Australians waste an average of 102 kg of food every year.

FareShare tackles this head on by rescuing surplus, quality food from supermarkets, farmers and other businesses that would otherwise goes to waste. This helps keep food out of landfill and avoid greenhouse pollution.

We are a charity and rely on the generosity of philanthropic foundations, businesses and individual donors.

FareShare is co-founder of the national Feed Appeal which has raised $7.5 million in grants to support local food relief efforts. 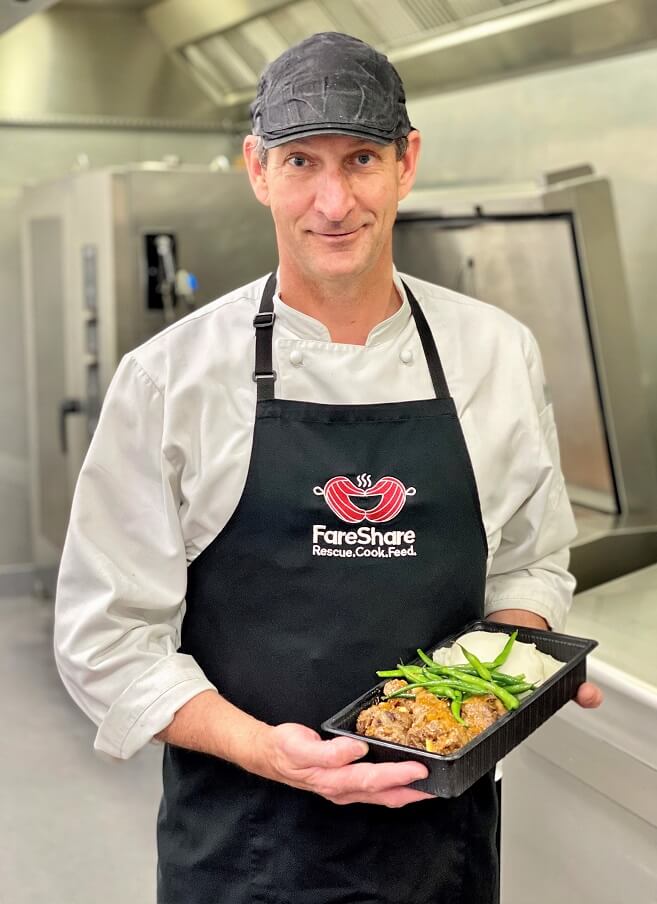 With little government funding, FareShare runs a small but effective and committed team.

Learn about our staff

Our board is made up of skilled members of the Melbourne community, who kindly donate their time and experience to help FareShare feed as many people as possible.

Learn about our Board and Patron

Grants from philanthropic foundations and trusts provided the seed funding to establish FareShare, invested in our first and then second kitchens and contribute towards our operating costs.

Learn about our wonderful philanthropic supporters

Companies supply food, provide pro bono goods and services and importantly donate. For many businesses they don’t just support FareShare, they are a part of FareShare.

Learn about our business supporters

Want to learn more about food rescue and hunger? If you belong to a school, organisation or club in Melbourne, FareShare can provide a speaker to share our inspiring story in return for a donation or food drive. 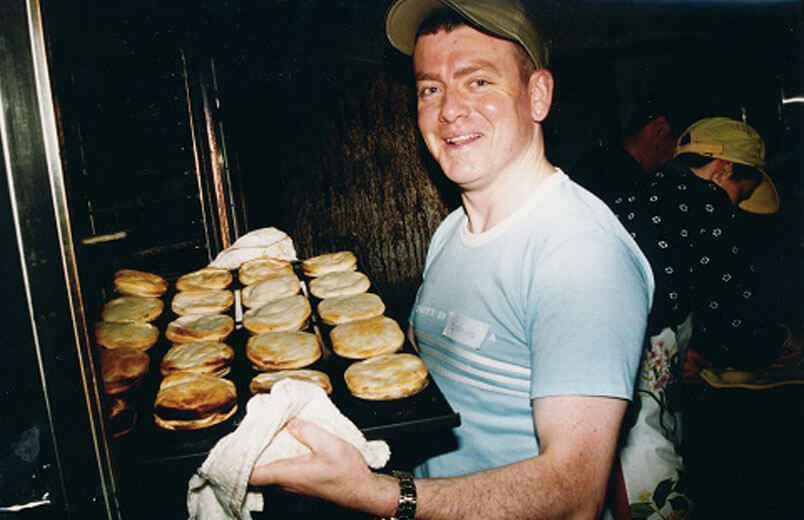 In 2000, a pastry chef called Guido Pozzebon started cooking 300 pies every Saturday morning for the Salvation Army and St Vincent de Paul. Guido and a group of friends would meet at the RACV Club and use surplus food accumulated over the week to cook savoury pastries. Within months the group was calling itself One Umbrella and was rescuing food that would otherwise be wasted.

Seperately a Melburnian named Steven Kolt returned from a visit to the United States inspired by the work of New York City Harvest, an organisation which rescues food for the needy. Steven was a member of Jewish Aid (now Stand Up) and together with other members started collecting prepared meals from function halls and catering venues. They called the project Melbourne City Harvest.

By late 2001, these two efforts merged and FareShare was born. With funding from Jewish Aid (now Stand Up), the Pratt Foundation and the RACV Foundation, a full-time staff member was employed and a refrigerated van purchased.

While many businesses were keen to provide FareShare with their surplus food, legal barriers prevented many from doing so. In 2002, FareShare teamed up with the Law Institute of Victoria and successfully lobbied the Victorian Government to introduce Australia’s first Good Samaritan law to protect food donors. Similar legislation has since been put in place in every other state and territory.

With generous support from philanthropic foundations, particularly the Jack and Ethel Goldin Foundation, FareShare established our first dedicated kitchen in 2008 in Abbotsford.

This major development enabled us to recruit more food donors and volunteers, and to add a second and then third daily shift, increasing our meal output.

Despite a growing number of regular volunteers cooking nearly 500,000 meals a year FareShare, was still falling well short of meeting charities’ requests for food to support people in need. The obvious solution was to set out to establish a larger premises and a kitchen capable of cooking one million meals a year.

In 2013, with the generous assistance of a number of organisations including the Ian Potter Foundation, FareShare started cooking in Australia’s largest charity kitchen – also in Abbotsford. Located in South Audley Street, the purpose-built kitchen allowed us to scale up production dramatically.

In 2016, FareShare started growing our own vegetables with the launch of  our kitchen garden program. We cleared a disused site alongside Victoria Park Railway Station for our first garden, and then established a second on vacant land at Moorabbin Airport. Our third plot, on the Baguley family farm in Clayton South, added significant potential for yield.

In 2018, FareShare began work on a second kitchen in Brisbane to harness ingredients supplied by Foodbank Queensland. The new kitchen is being developed with the capacity to cook five million meals a year.

FareShare celebrates the first anniversary of our Brisbane kitchen by cooking one million meals in the new facility. The bushfire season starts early with FareShare providing meal support to devastated communities.

A year of crisis brought on by devastating bushfires and the COVID-19 pandemic, creates unprecedented demand for FareShare meals. Forced to suspend our volunteers through lockdowns, FareShare scales up production with the support of hospitality staff funded by Woolworths, ALH Group and the Victorian Government. Our kitchens cook a combined total of 3.7 million meals.

The Feed Appeal was co-founded by FareShare in 2009 to help grassroots food relief charities feed more people in need.

FareShare and fellow founder News Corp Australia recognised that frontline food charities often lacked the infrastructure or funding to nourish their communities as much as they would like. In 2019, the Feed Appeal became a national fundraiser.

Feed Appeal donations are dispersed through grants to enable charities to receive, store and distribute more food to vulnerable Australians. The grants are decided by state committees.

Since its inception, the Feed Appeal has raised $9.8 million, given funding to 410 community food relief charities across Australia and provided almost 20 million meals to Aussies in need.

This added capability ensures local charities can accept FareShare meals and food donations from other sources such as Foodbank, SecondBite or businesses to support people who have fallen on hard times.

One hundred per cent of money raised during the Feed Appeal is given back to charities, thanks to philanthropic funding from Newman’s Own Foundation.

FareShare is committed to making a long-term contribution to the collective effort of food relief in Australia via the Feed Appeal each year.