Nutritious, delicious but not for sale!

Published by Katrina Dunnett on October 15, 2021

John was recovering at home from a knee replacement when he received a call out of the blue asking if he was home to receive a delivery.

To his surprise someone arrived at the door with a large package choc a bloc with food. At the bottom were five single-serve FareShare meals.

“There was a nice soup which was absolutely delightful, pork and vegetable dumplings with Ramen noodles, smoked chicken with chickpea braise,” says John, who is 76 and lives alone.

“I was unable to get out and didn’t want to be a burden on neighbours to shop for me. People knew I’d been in hospital and someone from the church put my name forward for a charity parcel.”

The highlight was the ready-to-eat FareShare meals – exactly what the doctor ordered while John was still in pain from his surgery and unable to shop or cook for himself.

“I was pleasantly surprised with the flavour and packaging of the meals,” says John, who mistook them for shop-bought products.

In fact, he enjoyed them so much that once he was back on his feet and able to drive, he called our Melbourne kitchen to ask where he could buy them.

“I assumed they would be available at a supermarket. It’s a bit disappointing that I can’t get them now!”

At least John knows that he can access delicious, microwaveable meals if he’s ever incapacitated again. 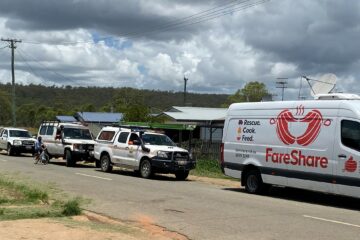 A special FareShare meal drop assisted by the State Emergency Service has brought welcome relief to the embattled residents of Cherbourg Aboriginal Shire Council. The small community about 250 km northwest of Brisbane was hit Read more… 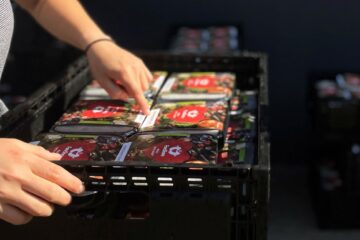 A warm welcome and a freezer stocked with FareShare meals greet the 80 or so people who line up for food assistance at Thornbury Church of Christ three times a week. The free community pantry Read more…